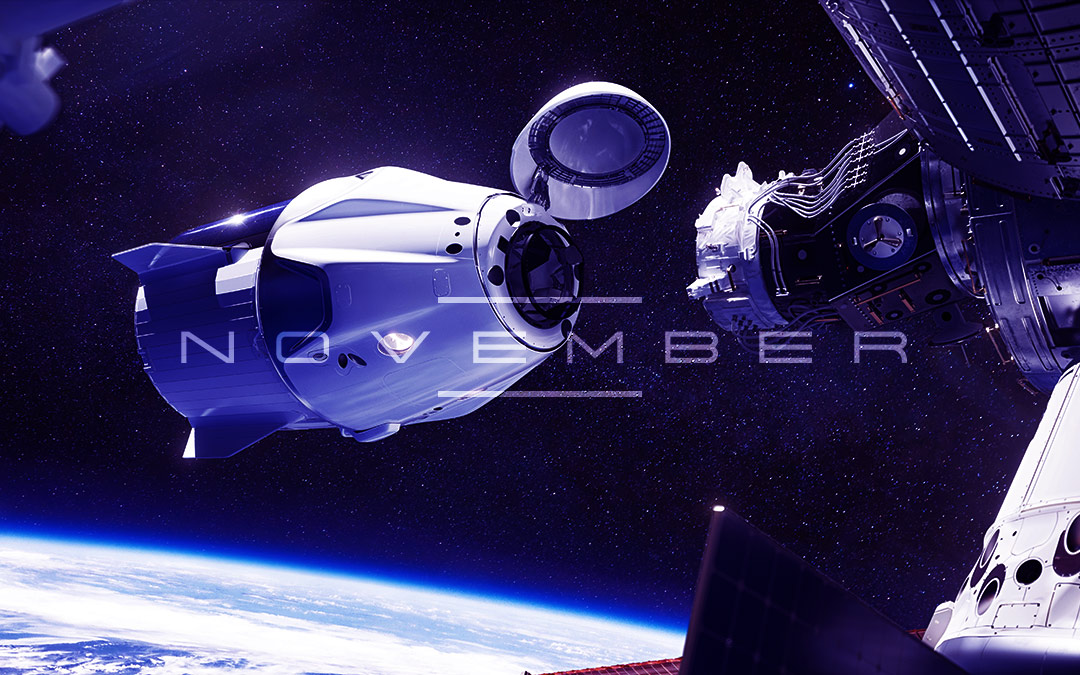 This Month in Space: November 2020

If it seems like there’s always history in the making on the Space Coast, you’re right! This month saw the successful launch and delivery of four astronauts — and their very cute friend — to the International Space Station, as well as the return of regular crewed missions to space and expansion of NASA’s public-private partnerships. Read on to see what November had for the history books.

After a successful launch from Kennedy Space Center on Nov. 15, the SpaceX Crew Dragon Resilience successfully docked with the International Space Station at 11 p.m. the following day.

The crew includes three NASA astronauts and one astronaut from the Japan Aerospace Exploration Agency. The Spacex Crew Dragon Resilience will join three other astronauts, including NASA’s Kate Rubins, as well as Sergey Rhyzhikov and Sergey Kudryashov of Roscosmos.

During the welcoming ceremony and press conference, the astronauts discussed their upcoming expedition, which aims to increase the regular space station crew size from six to seven astronauts. This significant development will allow for more crew time for research, launch, rendezvous and docking.

As the Artemis moon missions begin to take shape, NASA is seeking new partners to help document the first steps in establishing a sustainable human presence on the Moon, with an eye toward Mars. NASA released the call for proposals early this month, and they’re due back to the agency before midnight on Dec. 11.

“We’re looking for partners to use advanced technologies, imagery applications and approaches that will go beyond our standard coverage on NASA TV,” said NASA Administrator, Jim Bridenstine, in a press release on Nov. 5. “We want to capture the awe of Apollo for a new generation — the Artemis generation.”

While cameras are often outfitted on spacecraft for technical and operational support, NASA is looking to its potential partners to increase imagery that can be broadcast or shared with the world audience. NASA is hoping for a partner with the technology to include virtual reality systems, advanced imagery compression, 4K and Ultra HD camera systems and robotic thirdperson views for incredibly engaging content for viewers.

ISS Is a Full House with Astronauts and Baby Yoda

When the astronauts aboard Dragon Resilience docked with the International Space Station on Monday, Nov. 16, it was the first time that seven crew members would be living on the ISS for an extended six-month stay.

For NASA astronaut Victor Glover, it’s his first time in space, and he’s also the first full-time Black crew member of the ISS. “I’ve seen a ton of pictures, but when I first looked out the window at Earth, I had no words. It was an amazing, once-in-a-lifetime feeling,” Glover said in a news conference from the ISS on Nov. 19.

NASA astronaut Kate Rubins, who was already onboard the ISS with two Russian cosmonauts, said that it’s getting a little crowded on the station, but in a good way. She said that with the increased crew, they’ll be able to accomplish much more with seven than they would be able to with six. Along with running hundreds of experiments aboard the space station, the crew also spends a lot of their time doing maintenance.

The Dragon crew also brought along an alien friend — Baby Yoda — as a zero-gravity indicator aboard the Resilience spacecraft. It’s a long-standing tradition where each crew selects a toy to ride along for the launch. When the toy starts to float, the crew knows they’ve reached space. “Baby Yoda … puts a smile on everyone’s face,” said astronaut Michael Hopkins. “Although I think the ride into space was a little rougher than what Baby Yoda is used to.”

Patrick Air Force Base is one of six sites on the shortlist for potential U.S. Space Command headquarters. The announcement was made on Nov. 19, and puts Central Florida one step closer to being the hub for the United States’ newest military branch.

With a unique mix of defense, aerospace and technical workforce, Frank DiBello, president and CEO of state aerospace economic development agency, Space Florida, said that he was pleased that the Air Force had identified those capabilities in their selection process.

The Space Force headquarters is expected to bring economic growth to whichever spot it winds up. With more than 1,400 military and civilian personnel, the building would spur new aerospace, defense, telecommunications and information technology business to support it.

As part of NASA’s Commercial Crew program, the agency has finally certified the first commercial spacecraft system in history that will transport humans to and from the International Space Station. This follows years of design, development and testing of the spacecraft, and will allow for regular astronaut flights into space.

The certification is historic because it signifies the success of the public-private partnership between NASA and SpaceX, as well as the return to regular human crewed launches on American rockets and spacecraft from American soil. The Crew Dragon is the first to be certified for human flight since the space shuttle.

Over the past several years, SpaceX has performed several important tests to prove that the system was ready to fly a crew, including the Demo-2 mission to the ISS in May 2020. Prior to that, SpaceX and NASA completed demonstration flights like an abort test, parachute systems test, safe return after dock with the ISS, and launch escape demonstration.

NASA and SpaceX also coordinated with the Department of Defense and the U.S. Air Force for crew training and emergency rescue operations. “We are truly in the beginning of a new era of human spaceflight,” said Phil McAlister, director of commercial spaceflight development at NASA.