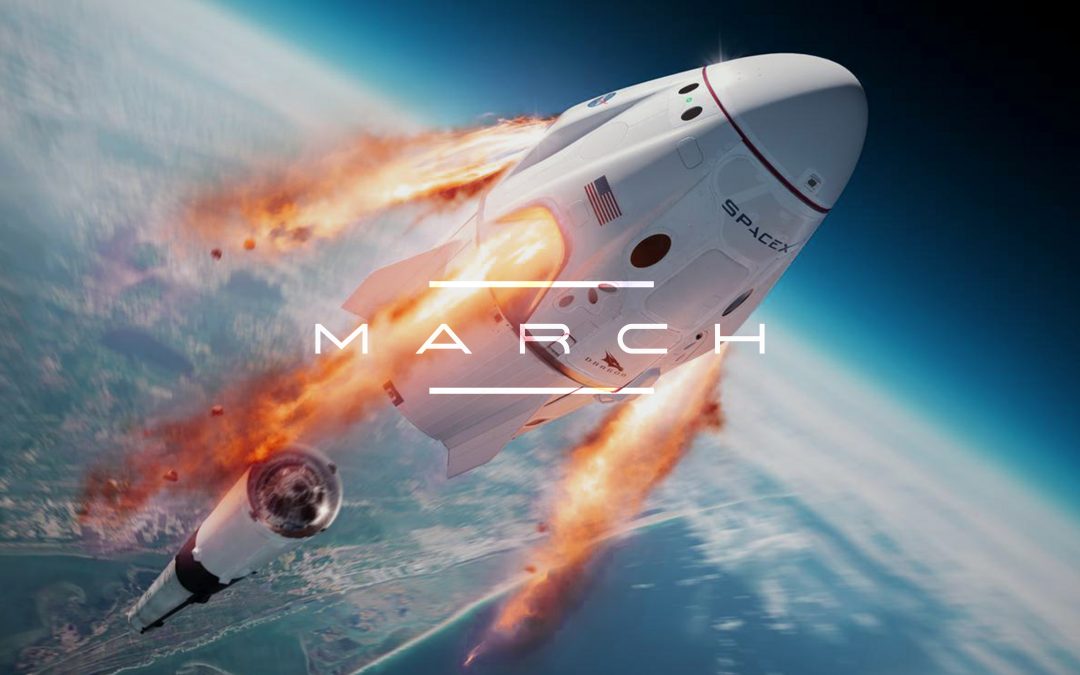 Right now, things are a little different and uncertain here on Earth, but there’s a lot happening throughout the rest of the universe. We’re covering it in our March edition of This Month in Space.

After a nationwide contest where 28,000 K-12 students submitted essays, the Mars Rover finally has a name: Perseverance.

Nicknamed Percy, the name was submitted by Alexander Mather, a seventh-grader at Lake Braddock Secondary School in Burke, Virginia. Mather will receive a free trip to Cape Canaveral, Florida, to watch Perseverance launch on July 17. At the name unveiling earlier this month, Mather read his winning essay and expressed his love of space.

“I want to go to college, get a degree in some form of engineering or science — space engineering and astronautics sound good right now. And then, after that, go work at NASA as an engineer.”

Thomas Zurbuchen, associate administrator of NASA’s Science Mission Directorate expressed that the name fits the new vehicle perfectly, “There has never been exploration — never, never been making history — without perseverance. Perseverance is a strong word,” he added. “It’s about making progress despite obstacles.”

Since its first rover launched in 1997, NASA has let schoolchildren name all of its Red Planet Rovers. 12-year-old Valerie Ambroise named the first rover, Sojourner after the abolitionist and activist Sojourner Truth. It was followed by Spirit and Opportunity in 2004 which were named by third-grader, Sofi Collins, and in 2012 Curiosity was named by sixth-grader Clara Ma.

NASA Not Pushing Back Next Mars Rover

Despite global concerns over COVID-19, NASA announced this month that it has no plans to push back the date for its Mars rover launch.

In an email sent to Fox News, NASA spokesman Allard Beutel stated, “We are proactively monitoring the coronavirus (COVID-19) situation, and have plans in place to address issues as they arise. Currently, the coronavirus has not impacted the Mars Perseverance rover launch preps, and work is continuing on schedule.”

NASA is slated to launch the rover on July 17, 2020, and will land on the red planet on February 18, 2021. While on Mars, the newly named Perseverance will explore the planet, will attempt to detect if there is any fossilized evidence of extraterrestrial beings, and will carry the first helicopter that will fly on another planet.

Mars has not been a big fan of NASA’s Heat Flow and Physical Properties Package, a.k.a. the “mole”. The device which is designed to take the internal temperature of the planet has been struggling after it first got stuck over a year ago.

The NASA InSight team has tried everything including patting the soil around the probe to pushing against the side of it to help it gain traction. NASA’s latest move involves pushing down on the top of the mole using the scoop on the end of InSight’s robotic arm.

On March 13, NASA tweeted, “A bit of good news from Mars: our new approach of using the robotic arm to push the mole appears to be working!” NASA intends to keep pushing on the mole over the next few weeks in hopes of making more progress.

Despite the hiccups, the rest of the mission has gone smoothly. In February, the InSight mission released a plethora of information regarding 174 marsquakes that have occurred since 2018

and evidence of perhaps thousands of swirling wind vortices, or “dust devils,” on the Martian surface.

NASA Details its Science Experiments for the Moon

Earlier this month, NASA announced that it has determined its first two investigations on the moon: observing space weather and monitoring the sun’s radiation. The instruments will be aboard NASA’s Gateway outpost orbiting the moon for NASA’s Artemis moon operations.

Built by the European Space Agency, the sun radiation instrument aims to keep astronauts safe, and the NASA-built weather instrument will observe solar particles and solar wind to help predict possible sudden outbursts by the sun.

Thomas Zurbuchen, NASA associate administrator for science stated, “Our Sun and the environment around it is very dynamic. This instrument suite will help us observe the particles and energy that our star emits — and mitigate the risks to astronauts at the Moon and eventually Mars.”

In an effort to boost launches on the Space Coast, SpaceX announced that it plans to launch 70 missions a year by 2023 from its two Florida launch sites at the Kennedy Space Center and nearby Cape Canaveral Air Force Station.

Using Falcon 9 and Falcon Heavy rockets, this rate is a seven-fold increase from the 11 missions SpaceX put into orbit in 2019, and almost double the 38 planned launches in 2020.

The proposed increase is because of the company’s Starlink satellite mega constellation and to meet the flight demands of its customers according to a federal environmental report. In addition to the increase in launches, SpaceX also plans to build a massive mobile service tower which will allow some missions to be assembled vertically, rather than horizontally and will have the capability to launch to polar orbits.

While SpaceX’s plans are still guarded, in general, the company has made announcements that do point to far more launch activity in the coming years. SpaceX is in the midst of building out its Starlink constellation, which could include as many as 42,000 individual satellites and it is also planning to launch humans from Florida’s Space Coast when its Dragon spacecraft is certified under NASA’s Commercial Crew program, which could happen as early as this year. This will be the first time humans have been launched from the Space Coast since the end of the space shuttle program in 2011.