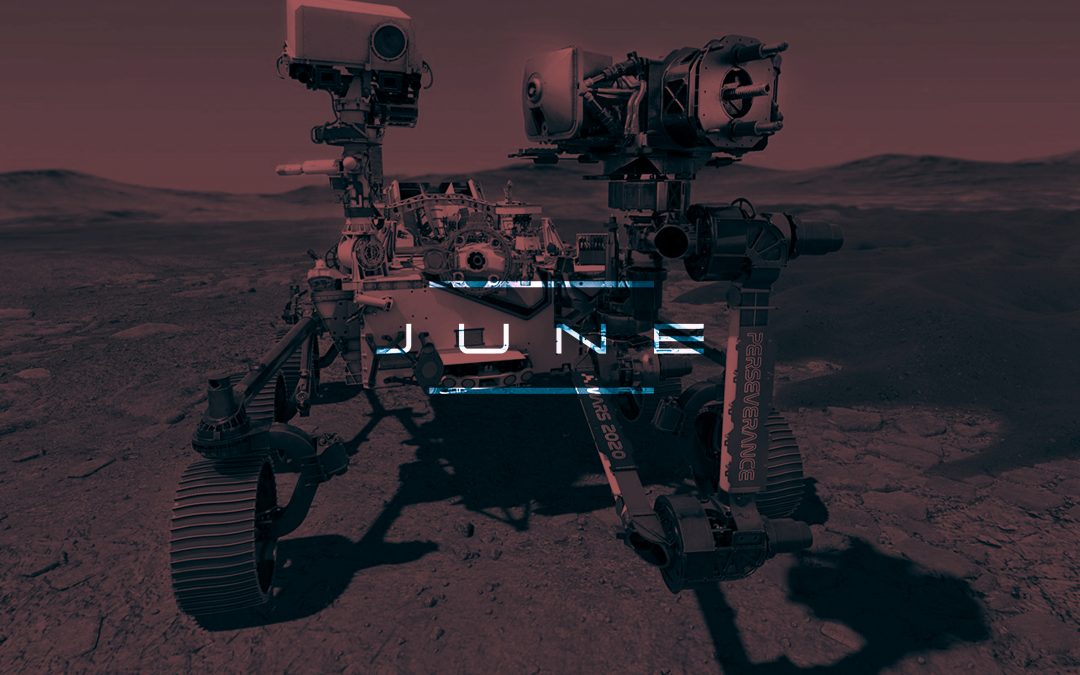 Despite the global COVID-19 pandemic, the first half of 2020 has been an exciting time for space exploration and there’s a lot more to look forward to in the second half of the year! Right now, get caught up on what happened in June in our latest edition of This Month in Space.

Mars rover, Perseverance will have to stay on earth for a little longer. According to NASA, the launch of the small SUV-sized rover from Florida’s Cape Canaveral Air Force Station has been pushed to July 30 because, “additional time was needed for the team to repair an issue with the ground system equipment.”

Tory Bruno, the CEO of United Launch Alliance, which is providing the Atlas V rocket that will send Perseverance on to Mars explained that the issue involved a faulty crane. However, it has been fixed and the rocket is fine. Despite the delay, there is some wiggle room in regards to the launch date. The rover’s launch window extends through August 11th, but this is a hard deadline as a liftoff opportunity only comes around once every 26 months, because Mars and Earth need to be properly aligned for interplanetary missions.

Whenever Perseverance launches during this window, it will make landfall on February 18th, 2021, at Jezero Crater to hunt for signs of ancient microbial life.

NASA astronauts Bob Behnken and Chris Cassidy will leave the comfort of the ISS to perform a series of spacewalks with the first being set for the morning of June 26th and the second scheduled for July 1st. Both walks will take roughly 7 hours.

According to NASA, the duo will begin replacing old nickel-hydrogen batteries for one of the ISS’ power channels with new lithium-ion batteries that arrived at the ISS last month on a Japanese cargo ship. During the spacewalks, Cassidy will be identified as the astronaut wearing the space suit with red stripes, and Behnken will sport a space suit with no stripes.

NASA officials said the walks will mark the seventh and eighth spacewalks for each astronaut and the 228th and 229th performed for space station assembly, maintenance, and upgrades.

Rocket booster segments and motors that will power NASA’s first Artemis flight test mission around the Moon arrived at Kennedy Space Center on June 15th via train from a Northrop Grumman manufacturing facility in Promontory, Utah. The cross-country journey took 10-days and it is a crucial step toward the first launch for the Artemis Program.

“The arrival of the booster segments at Kennedy is just the beginning of the SLS rocket’s journey to the pad and onward to send the Orion spacecraft to the Moon,“ said NASA Administrator Jim Bridenstine. “Artemis I will pave the way toward landing the first woman and the next man on the surface of the Moon in 2024 and expanding human exploration to Mars.”

Each booster segment, weighing a staggering 180 tons, is filled with propellant and outfitted with key flight instrumentation. Due to the weight, Northrop Grumman transported the segments in specially designed railcars to make the almost 3,000-mile trip across eight states.

Kennedy Space Center’s visitor complex is proud to announce that it has resumed operations with limited hours and a cap on visitors.

Howard Schwartz, senior director of marketing and sales at Kennedy Space Center stated that they will be allowing only 25 percent of its total capacity until further notice. “We’re trying to make sure we abide by guidelines set by the state and national health organizations and that we are actually being even more cautious,” Schwartz said. “We analyzed the traffic flow we normally get and square footage and settled on 25 percent for now.”

Currently, ticket prices have been reduced to $29.99 plus tax for adults, compared to $57 previously. This is because several popular attractions are not available yet like the popular Astronaut Training Experience that opened in 2018 due to social distancing requirements. Bus tours that take visitors to view launch pads and meet and greets with NASA astronauts are also on hold until further notice. Masks are also required for all visitors and employees, except when eating.

NASA announced this month that astronauts Doug Hurley and Bob Behnken are set to return from the ISS in August. However, according to Ken Bowersox, the acting associate administrator for NASA’s human exploration and operations mission directorate, this will depend on several factors, such as the performance of their Crew Dragon spaceship, the progress of their work on the space station, and weather conditions in the capsule’s landing zones in the Atlantic Ocean and the Gulf of Mexico.

The successful liftoff of the SpaceX Crew Dragon marked the beginning of a new era in space flight and brought back launching astronauts into orbit from U.S. soil after a 9-year hiatus.

During their mission, Behnken is expected to perform at least two spacewalks with space station commander Chris Cassidy and Hurley will be operating the space station’s robotic arm. Before Behnken and Hurley arrived at the ISS, Cassidy was the only U.S. astronaut on the space station. He arrived via a Russian Soyuz spacecraft in April.

“It is very likely that by the end of July, we will have conducted some spacewalks with Chris Cassidy and Bob Behnken, replaced some batteries on the ISS, and we’ll — about two months from now — start thinking about bringing Bob and Doug home,” said Bowersox, a former astronaut, and SpaceX executive. “We’d like to get them home sometime in August.”

Bowersox stated that strict wind limits for the Crew Dragon spacecraft flying the Demo-2 mission will also come into play as NASA and SpaceX plan the return schedule. In some cases, the wind limit for splashdown could be as low as 9 knots.

“The Demo-2 vehicle has a little bit tighter restrictions on its landing wind requirements, so we’ll need to provide extra lead time for the weather possibilities, but I think it will all work out in August,” Bowersox said. “August is often a light wind month in the parts of the Gulf (of Mexico) and the east coast of Florida that we’re looking at landing, so I think we’ll be able to find a good opportunity in there.”