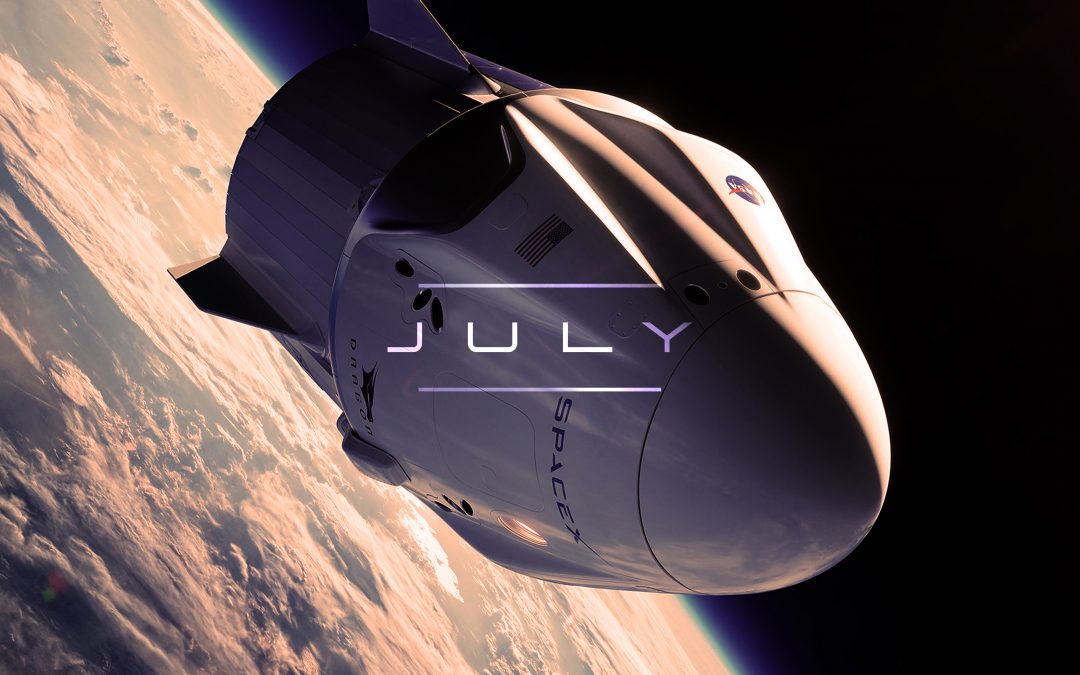 We’re really excited about Mars rover, Perseverance set to launch at the end of this month, but there’s still a ton of other interesting things happening on the Space Coast and in the universe. We’ll help you get caught up on all the intergalactic news you need in this edition of This Month in Space.

NASA astronauts Bob Behnken and Doug Hurley will be heading back to Earth on the SpaceX Crew Dragon after completing their landmark mission to the International Space Station earlier this summer. According to NASA’s Johnson Space Center Public Affairs Officer Kyle Herring, the Crew Dragon is scheduled to splashdown in the Atlantic Ocean on August 2 at roughly 3 p.m. ET.

SpaceX made history on May 30, as it became the first company to send passengers to orbit on a privately made vehicle. It was also the first time since 2011 that astronauts were launched into orbit on American soil. The Crew Dragon returning to Earth has been a worry for SpaceX founder, Elon Musk. “The return is more dangerous in some ways than the ascent, so we don’t want to declare victory yet,” Musk told reporters after the launch on May 30.

Behnken and Hurley will have to endure a “firey fall” that will require the Crew Dragon to endure temperatures up to 3,500 degrees Fahrenheit. NASA spokesperson, Stephanie Schierholz explained that the journey to a safe landing point in the ocean could take anywhere from six to 30 hours. If everything goes as planned, the capsule will splashdown in the Atlantic Ocean 22 to 175 nautical miles off the Florida coast.

The countdown has started for Mars Rover, Perseverance

After several delays, Perseverance is set to launch into orbit on board an Atlas V rocket on July 30 from Cape Canaveral, Florida. Delayed three times before, the launch window for Perseverance is only until August 11. Because Earth and Mars only align correctly for interplanetary travel only once every 26 months, if the rover can’t take off this summer, the mission will have to be “frozen” until the autumn of 2022.

Unfortunately, due to COVID-19, NASA will not allow visitors to attend the launch. Instead, NASA unveiled various online activities surrounding the launch, including a Facebook group called #CountdownToMars Virtual NASA Social. The launch will also be streaming live.

SpaceX to revive polar launch trajectory from Florida, a first in 60 years

SpaceX will be making history again this summer by bringing back southern trajectory polar corridor launches to Florida’s Space Coast with the launch of the Argentine SAOCOM-1B radar observation satellite set to launch at the end of July depending on “schedule shuffling” from SpaceX.

The SAOCOM-1B mission has been affected by delays ranging from hardware processing and integration to international launch team travel restrictions due to the coronavirus pandemic. Originally intended to launch from Vandenberg Air Force Base in California, SpaceX formally requested to move the launch to Florida utilizing a southern, coast-hugging dog-leg trajectory over Cuba to a final polar orbital inclination. This will be the first polar launch in Florida since the 1960 Thor launch.

According to Argentina’s National Commission for Space Activities (CONAE) and SpaceX, the SAOCOM-1B mission launch window extends from Saturday, July 25 to Thursday, July 30 with a targeted liftoff at approximately 7:19 p.m. EDT from SLC-40.

Earlier this month, NASA and the European Space Agency (ESA) released the first photos from its jointly commissioned Solar Orbiter. Taken from 48,000,000 mi away, these are the closet pictures of the Sun ever taken. Launched on February 9, 2020, the Solar Orbiter is an international collaboration between the ESA and NASA to study the Sun.

“These unprecedented pictures of the Sun are the closest we have ever obtained,”  said Holly Gilbert, NASA project scientist for the mission at NASA’s Goddard Space Flight Center in Greenbelt, Maryland. “These amazing images will help scientists piece together the Sun’s atmospheric layers, which is important for understanding how it drives space weather near the Earth and throughout the solar system.”

The Solar Orbiter carries six instruments, each of which studies and captures a different aspect of the Sun. The Extreme Ultraviolet Imager (EUI), has already returned data revolving around solar features that have never been seen before in such close detail. David Berghmans, an astrophysicist at the Royal Observatory of Belgium in Brussels, describes “campfires” dotting the Sun in EUI’s images.

“The campfires we are talking about here are the little nephews of solar flares, at least a million, perhaps a billion times smaller,” Berghmans said. “When looking at the new high-resolution EUI images, they are literally everywhere we look.”

Although the first images from any mission are usually intended to confirm that its instruments are in working order, these images from the Solar Orbiter are impressive, to say the least. We didn’t expect such great results so early,” said Daniel Müller, ESA’s Solar Orbiter project scientist. “These images show that Solar Orbiter is off to an excellent start.”

It only happens every 7,000 years, but star-gazers in the northern hemisphere were treated to an experience of a lifetime as they were able to spot Comet NEOWISE.

Although it could be seen earlier in the month, NEOWISE was closest to Earth on July 22nd and 23rd. Professional and amateur astronomers only needed to use a pair of regular binoculars to spot the 3-mile wide chunk of ice and dust slowing looping around our galaxy. NASA scientists estimate the liquid part as the equivalent of “13 million Olympic swimming pools of water.” It is moving about 40 miles per second or 144,000 mph.

“This is the most impressive-looking comet that I have seen since the 1990s with Hale-Bopp,” stated George Hripcsak, an amateur astronomer in New York City who was interviewed by Wired magazine.

Formally named C/2020 F3, the comet is now named NEOWISE after the acronym for the NASA telescope (the Near-Earth Object Wide-field Infrared Survey Explorer) that discovered it in March.