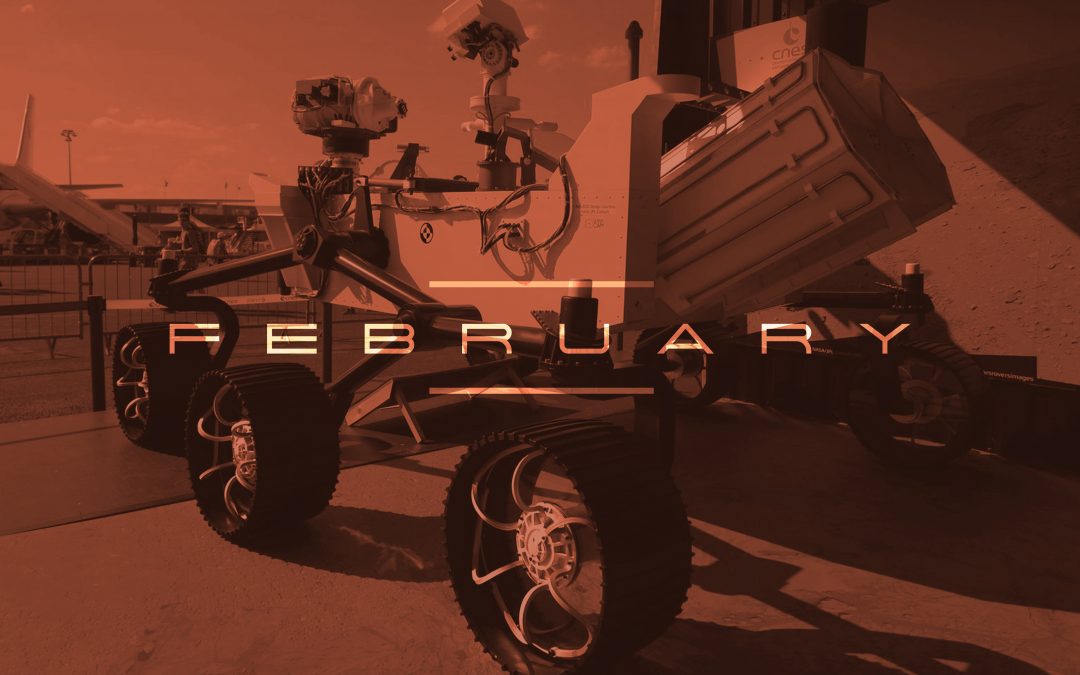 This Month in Space: February 2020

Do you have what it takes to be an astronaut? What about enough money in your bank account to book a rocket launch with SpaceX? We cover this and more in our February edition of This Month in Space.

After a 2,300-mile journey that began on February 11 at NASA’s Jet Propulsion Laboratory in Pasadena, California, the Mars 2020 Rover arrived at Kennedy Space Center to begin final preparations for its launch to Mars in July.

In the early hours of February 11, the rover, cruise stage, descent stage, and mission support equipment headed in four police-escorted trucks to the U.S. Air Force’s March Air Reserve Base, where they were loaded aboard two C-17s.

“Our rover has left the only home it has ever known,” said John McNamee, Mars 2020 project manager. “The 2020 family here at JPL is a little sad to see it go, but we’re even more proud knowing that the next time our rover takes to the skies, it will be headed to Mars.”

The next step will be to test all of the components to ensure that no issues occurred during transport. After that, it will be assembled, undergo more testing and finally will board a United Launch Alliance Atlas V rocket that will head toward Jezero Crater on the Red Planet in early July.

The SpaceX Crew Dragon that will fly the company’s first-ever crewed mission has arrived on the Space Coast on February 13 after completing a cross-country trek from its California headquarters.

Slated for early May from Pad 39A at NASA’s Kennedy Space Center, Demo-2 will be the first orbital human spaceflight to lift off from American soil since the final space shuttle mission in July 2011. If the flight goes as planned, SpaceX will most likely be cleared to perform crewed missions to the ISS for NASA. In September 2014, NASA awarded Elon Musk’s company a $2.6 billion contract to finish the development of Crew Dragon and fly six crewed flights to and from the orbiting lab.

Astronauts Michael E. Lopez-Alegria, Pamela A. Melroy, and Scott Kelly will be inducted in the U.S. Astronaut Hall of Fame on May 16, 2020, at a gala at the Kennedy Space Center Visitor Complex.

“As we enter the year 2020, we are particularly excited to welcome these accomplished astronauts into the United States Astronaut Hall of Fame,” said Curt Brown, space shuttle astronaut and board chairman of the Astronaut Scholarship Foundation, which oversees the selection process.

“They exemplify bravery, dedication and passion and their hard work has paved the way for what promises to be an unprecedented new decade of space exploration and interplanetary travel.”

Created over 30 years by the six surviving Mercury 7 astronauts, each year inductees are selected by a committee of Hall of Fame astronauts, former NASA officials, flight directors, historians, and journalists. According to NASA, inductees must have made their first flight at least 17 years before the induction, must be a U.S. citizen, a NASA-trained commander, pilot or mission specialist, and have orbited the Earth at least once. In 2016, a new U.S. Astronaut Hall of Fame opened at Kennedy Space Center Visitor Complex, as part of its Heroes & Legends attraction.

Released on February 10, the 2021 budget request allocates $25.2 billion to NASA which is roughly 12-percent more than they received in 2020. $233 million will be allocated for “Mars Future Missions” which aims to get pieces of the Red Planet to Earth, as early as 2031.

“Mars Future supports the development of the Mars Sample Return (MSR) mission that is planning to enter formulation (Phase A) as early as the summer of FY 2020,” NASA officials wrote in a description of the agency’s proposed 2021 allocation.

“In FY 2021, MSR formulation activities include concept and technology development, and early design and studies in support of the Sample Return Lander and the Capture/Containment and Return System,” they added. “Mars Future also supports a study of the facility required for handling of returned samples.”

Want to be an Astronaut? NASA Will Accept Applications Soon

From March 2 to 31, individuals interested in flying to the International Space Station – and possibly even to the moon as part of the Artemis program – will be able to send their applications and resumes to NASA. For the first time, the application to become an astronaut will include a two-hour online assessment.

Requirements to apply include:

If selected, candidates must pass the agency’s long-duration physical. NASA hopes to make the final decisions by mid-2021.

If interested, applications will be available on usajobs.gov. To learn more, visit nasa.gov/astronauts.

Rideshare services are more popular than ever, so it makes sense that SpaceX is starting its own service. SpaceX recently launched a new web-based booking tool for its rideshare Falcon 9 launches, a service for small satellite customers who don’t have the budget or need to book a full rocket, which can cost upwards of $60 million.

Prices for the rideshare services that SpaceX is offering start at $1 million for payloads ranging up to 200 kg (440 lbs), with additional weight adding $5,000 per kg to the cost.

The booking tool will ask you for a desired orbit, which clients can pick from polar orbit (a line that runs over both poles at 90 degrees to the equator), Sun-synchronous orbit (a specific orbit that allows solar panels to work continuously), or low-Earth orbit (Earth-centered at up to altitudes of 2,000 km).

To book your mission, visit https://www.spacex.com/smallsat.