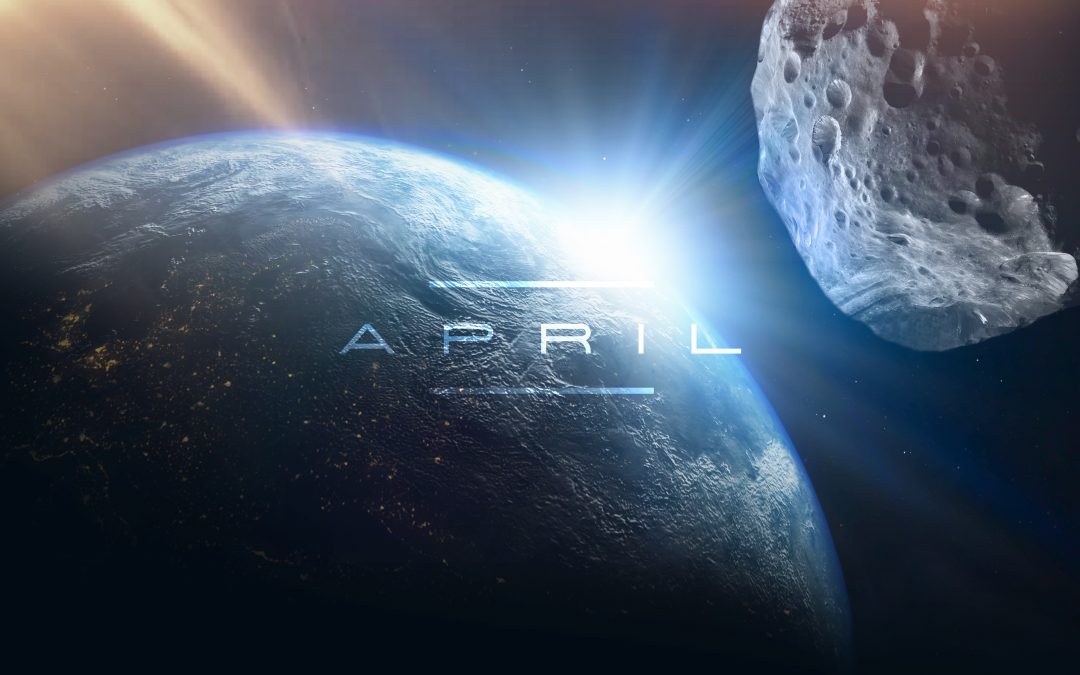 Do April Meteor showers bring May flowers? We cover what’s happening in space and science on April’s edition of This Month in Space.

A Gigantic Asteroid Passes Near Earth

An asteroid roughly the size of Mount Everest will zoom past Earth on April 29. Named 52768 (1998 OR2), the asteroid was first discovered in 1998 and is estimated to be between 1.1 and 2.5 miles wide. According to NASA’s Center for Near Earth Object Studies, the asteroid is traveling at 19,461 miles per hour and will be closest to Earth on Wednesday, April 29, at 4:56 a.m. ET. The asteroid was classified as a potentially hazardous object because it passes near Earth’s orbit, but it’s not currently on NASA’s list of potential future Earth impact events.

Roughly costing $1 billion, the satellite is the sixth and final one in the U.S. military’s Advanced Extremely High Frequency series. Upgraded from the older Milstar satellites, the constellation has provided secure communication from 22,000 miles up for nearly a decade. The AEHF satellite system was developed by Lockheed Martin and provides communications for strategic command and to all U.S. military branch soldiers around the world.

Despite the coronavirus outbreak, the mission was deemed essential. Gen. John Raymond tweeted after the launch,” Congrats @ulalaunch on today’s successful launch of #AEHF6—our 1st USSF Nat’l Security Space Launch! Great teamwork by all partners @LockheedMartin @AerojetRdyne @AF_SMC @45thSpaceWing. On behalf of the @SpaceForceDoD & joint warfighters who depend on protected SATCOM…THANK YOU!.”

The first-of-its-kind Mars Helicopter was attached to the Perseverance Rover in preparation for its July launch on April 6, at Kennedy Space Center. The Mars Helicopter will be the first aircraft in history to attempt power-controlled flight on another planet.

Weighing only 4 lbs, the Mars Helicopter features propellers 4 feet in diameter. NASA engineers made 34 electrical connections between the rover, the helicopter, and its delivery system on the rover’s belly. After confirming data and commands could be sent and received, they attached the delivery system to the rover. The helicopter will initially receive power from the rover. Eventually, it will generate its own power via a solar panel located above its propellers.

The helicopter will remain encapsulated on the rover’s belly for the next year and will be deployed roughly two-and-a-half months after Perseverance’s landing on Mars.

SpaceX, Blue Origin, Virgin Orbit, and ULA Help in the Fight Against Coronavirus

Brevard County’s best and brightest are doing what they can to help individuals during the recent COVID-19 pandemic. Blue Origin is using 25 of its 3D printers that make rocket parts to create hundreds of visors used for protective face shields to help with the shortage of PPE for healthcare workers.

Despite controversial statements in March made by Elon Musk regarding COVID-19, SpaceX is now building face shields and has delivered 75 of  them to Cedars Sinai, a major hospital in Los Angeles. According to an internal email shared with CNBC, the company is also ramping up to make a hand sanitizer that “complies with CDC guidelines and is effective at killing the COVID-19 coronavirus.”

Virgin Orbit is “working around the clock” on prototyping and testing ventilators for hospitals. The company has developed a bridge ventilator that is powered by a windshield wiper motor.

ULA CEO, Tory Bruno is taking working from home seriously. The self-proclaimed cowboy is using his own 3D printers at his ranch in Colorado to make face shields.

“As a company, our primary focus is fulfilling missions that are critical to national security throughout this public health emergency,” Bruno said. “I’m proud and thankful that we can also use our capabilities to protect medical professionals who are working to keep us safe and healthy.”