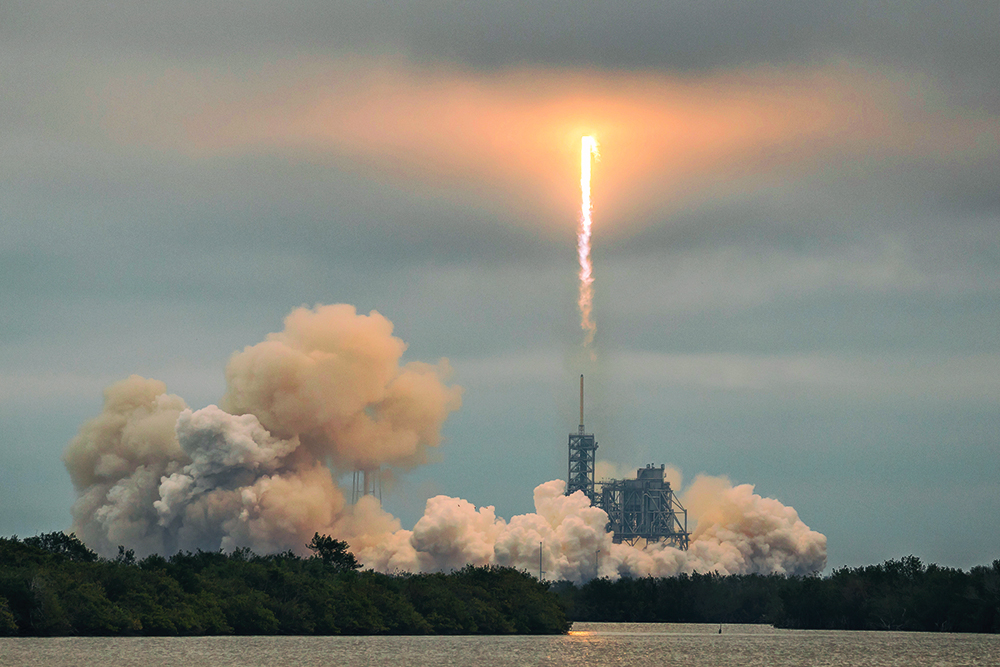 This Month in Space: February

What do the Super Bowl, Ryan Gosling and the Falcon Heavy have in common? They all topped our space headlines for the month of February! It may have been the shortest month of the year, but it was jam-packed with space news. Here are a few of the top headlines from the month: Â  Super Bowl 2018: Astronauts Watch the Big Game Super Bowl viewing party in space? Yep! NASA astronaut Joe Acaba posted this Twitter photo on February 4 with the caption, â€œThe big screen is up on the @Space_Station, and we are ready for the Big Game. Good luck to the @Patriots and @Eagles. #SuperBowl.â€   Watching the big game meant a late night for the space station crew. The kickoff was at 6:30 p.m. EST, or 11:30 p.m. for the station crew! Â  Â  Ryan Gosling’s â€˜First Man’ Filming on Florida’s Space Coast Ryan Gosling was on location February 5 at Kennedy Space Center filming his upcoming movie, First Man, in which he plays Neil Armstrong. Gosling and his co-stars filmed a Vehicle Assembly Building and crawler scene.   Not to mention, some of the Space Coast’s very own talent might show up on the big screen. A casting call went out to Central Florida actors in January looking for extras to be in the movie. Â  NASA Certifies SpaceX’s Falcon 9 Rockets for Science Missions SpaceX’s Falcon 9 officially passed its certification to launch some categories of science missions. It’s now officially certified as a Category 2 spacecraft which covers â€œmedium riskâ€ missions, and requires between one and three consecutive successful missions, depending on the vehicle’s heritage and level of NASA insight. That certification was required to clear the way for the launch of NASA’s Transiting Exoplanet Survey Satellite (TESS) mission in March 2018. Â  Spacewalking Astronauts Complete Robot Arm Work Two astronauts took a spacewalk outside the International Space Station (ISS) on February 16 to continue ongoing maintenance on the station’s robotic arm, called Canadarm2.   NASA astronaut Mark Vande Hei and Japanese Aerospace Exploration Agency (JAXA) astronaut Norishige Kanai kicked off the spacewalk at 7 a.m. EST, and spent 5 hours and 57 minutes working to relocate a pair of Canadarm2’s robotic â€œhands,â€ called latching end effectors. Â  Â  SpaceX Successfully Launches Falcon Heavy Finally, the biggest piece of space news: a successful maiden flight of the world’s most powerful rocket – SpaceX’s Falcon Heavy. On February 6, the 230-foot-tall rocket lifted off from Kennedy Space Center’s Launch Complex 39A, with an estimated 100,000 spectators watching from nearby viewing locations.   On its debut test flight, the Falcon Heavy met nearly all of its major objectives, including delivering its payload – a red Tesla Roadster, carrying a mannequin named â€œStarman,â€ – to space.   Looking for more news on launches, space crafts and more? Click here!