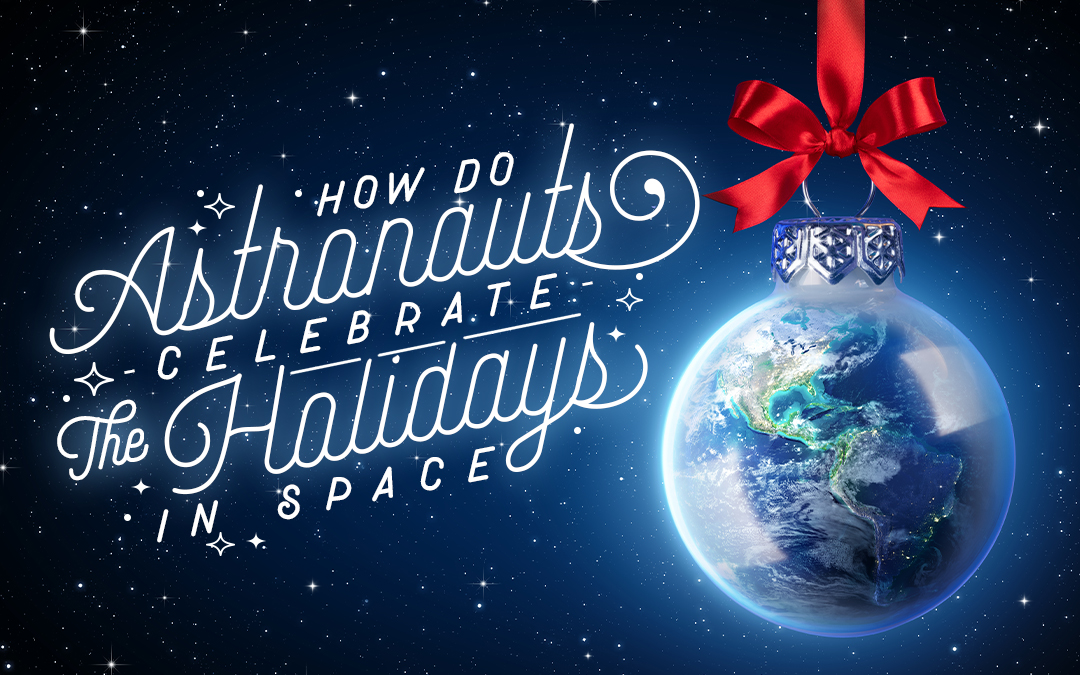 How do Astronauts Celebrate the Holidays in Space?

During the holiday season, most of us have certain traditions that we do. Whether it is decorating your home with lights and tinsel, or listening to Christmas music nonstop from Thanksgiving to New Year’s Eve, we each have our own ways to get in the holiday spirit. But what if you’re miles above the earth?   The first humans who celebrated the holiday season in space also were the first to orbit the moon. On Christmas Eve 1968, Apollo 8 astronauts Frank Borman, Jim Lovell, and Bill Anders sent images of the Earth and moon from orbit and transmitted a special Christmas message. The dinner menu for the history-making astronauts was cocoa, sugar cookies, orange juice, corn chowder, and chicken with gravy. On Christmas Day 1968, Anders stated during a live transmission, “I hope ya’ll had better Christmas dinners.”   Less than a decade later when NASA established Skylab, astronauts celebrated the holidays by making their own Christmas tree. In 1973, the three-person Skylab crew made a Christmas tree by using their old food cans.   Since 2000, the International Space Station (ISS) has been continually crewed; that means dozens of astronauts have had the opportunity to celebrate the holidays in space. There’s even a two-foot-tall artificial tree (not made of cans) on board to get astronauts in the spirit of the season.   Last year, NASA astronaut, Anne McClain and David Saint-Jacques of the Canadian Space Agency donned Santa hats, played with an Elf on the Shelf toy, and enjoyed a meal of smoked turkey, candied yams, corn, green beans, mac and cheese, and potatoes au gratin. For dessert, they had strawberries, bread pudding, butter cookies, and shortbread cookies that they were able to decorate with icing.   Create Your Own Space Themed Holiday Traditions   This holiday season, why not make new traditions? Here on Florida’s Space Coast, you can celebrate the holidays with a space themed flare! From December 13 to the 31, Kennedy Space Center Visitor Complex welcomes its visitors to Holidays in Space; a special celebration that combines the wonders of space and the magic of the holiday season. This 1960s-inspired holiday bash includes 10,000 sparkling lights, festive holiday décor, holiday music and interactive photo opportunities. Plus, as the sun begins to set, witness a dazzling spectacle of LED lights.   While you’re visiting, make plans to stay a little longer on Florida’s Space Coast and experience the holiday season with a trip to the beach to see Surfing Santas. Or hang out at Port Canaveral and explore the Exploration Tower for additional space knowledge! We hope to see you around this holiday season. To plan your holiday getaway, visit VisitSpaceCoast.com.