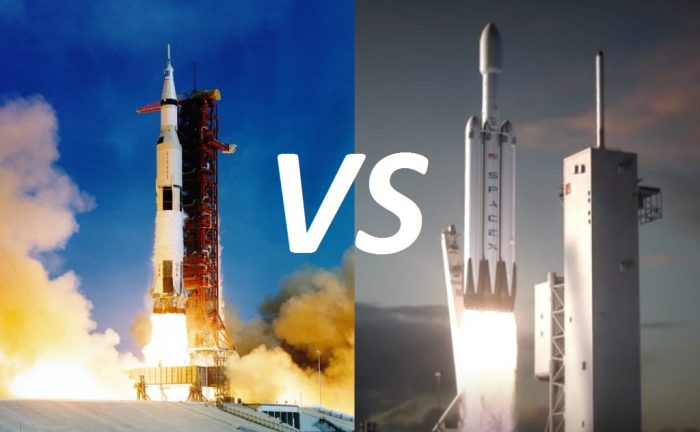 It’s a rocket showdown! Facing off, we have two of the heaviest and most powerful rockets the world has ever seen. On one side is the rocket that delivered the Apollo astronauts to the Moon: the Saturn V. And on the other, the next generation of launch vehicle which promises to carry man to Mars: the Falcon Heavy. Since the Saturns were retired in 1973, NASA has been without a rocket that can perform long-range crewed missions. That is, until Falcon Heavy. But, in terms of their history, design and specifications, how do these two heavyweights compare? That’s what we’re here to explore.

Developed at NASA’s Marshall Space Flight Center in Huntsville, Alabama, the Saturn V was designed to fly three Apollo astronauts to the moon and back. The rocket made its first unmanned test flight in 1967 and from then until 1973, a total of 13 Saturn V rockets were launched, carrying the Apollo missions as well as the Skylab space station.

The towering Saturn V rocket that carried the Apollo missions was comprised of three stages. The first stage had the most powerful engines, since it was responsible for lifting the fully fueled rocket off the ground to an altitude of about 42 miles.The second stage carried the rocket from there almost into orbit and the third stage placed the Apollo spacecraft into Earth orbit and pushed it toward the moon. Every part of the Saturn V rocket was discarded during the missions except for its command module. The size and power of the Saturn V was, and still is, remarkable. With the Apollo spacecraft on top, Saturn V stood 111 meters (363 feet) tall and was 10 meters (33 feet) wide. Fully fueled, it weighed 2,950 metric tons (6.5 million pounds), and had a payload capacity estimated at 118,000 kg (261,000 lbs), but was designed for the purpose of sending 41,000 kg (90,000 lbs) to the moon. At liftoff, Saturn V’s five Rocketdyne F-1 engines provided 34,000 kN (7.6 million pounds-force) of thrust!

Development of the Falcon Heavy was first announced in 2011. In a statement, CEO and chief rocket designer Elon Musk directly compared the rocket to the Saturn V, claiming that the Falcon Heavy would deliver â€œmore payload to orbit or escape velocity than any vehicle in history, apart from the Saturn V moon rocket, which was decommissioned after the Apollo program.â€ 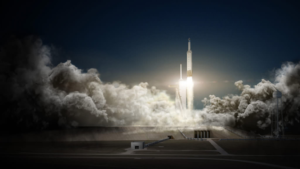 Falcon Heavy draws upon the proven design of Falcon 9, which minimizes stage separation events and maximizes reliability. The rocket works in two stages and measures 70 m (229.6 ft) in height and 12.2 m (39.9 ft) in width. The first stage is powered by three Falcon 9 cores, each of which is equipped with nine Merlin 1D engines. At liftoff, the Falcon Heavy will generate 3.8 million pounds of thrust, the equivalent of fifteen Boeing 747s taking off at the same time. Another feature of the Falcon Heavy is that each core includes four extensible landing legs and grid fins to control descent and conduct landings. SpaceX has been increasing its work with reusable rocket systems to ensure that the boosters and core stage can be recovered.

So…How Do They Compare?

Both of these rockets were designed to carry a remarkably heavy load. And, while Saturn V is still the reigning champ when it comes to size, weight and payload, Falcon Heavy comes with some serious advantages. It’s smaller, lighter and it’s reusability means it could perform several missions for much less cost. There’s no denying that the Saturn V made history during its commission. You can even see it for yourself on display at the Kennedy Space Center Visitor Complex. But, since the Falcon Heavy launch remains on the horizon, it’s hard to get an accurate comparison of the two. Should the Falcon Heavy launch successfully, though, it will likely be recognized as the successor to the Saturn V. Only time will tell which rocket will take home the gold as the champion in human space exploration.