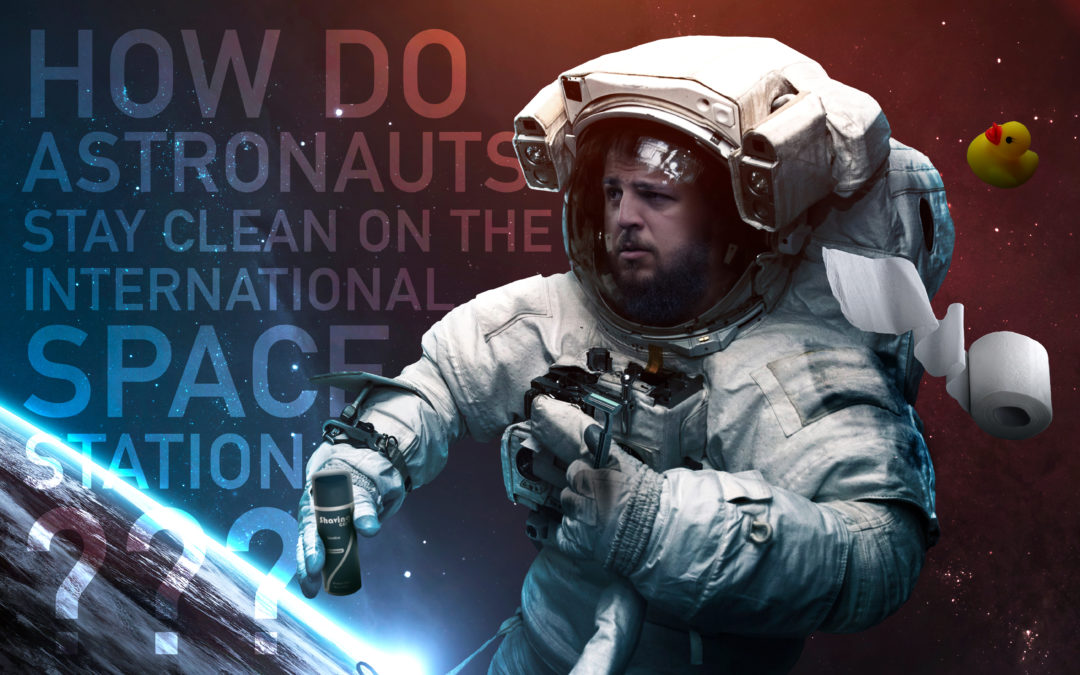 Everything you wanna know about the International Space Station Part 2

How do astronauts stay clean on the International Space Station?

Just about every normal earthly routine becomes tougher in space – and bodily hygiene is no exception. The International Space Station (ISS) has no running water, no sinks, no showers, or normal toilets, so you can imagine that this would pose a challenge for astronauts. Astronauts at the ISS stay clean with the help of specially designed tools. Every astronaut is provided with a hygiene kit which supplies shampoo, toothbrushes, toothpaste, combs, razors, and nail clippers. These may sound just like what we use here on Earth, but they’re used in very specific ways.

How do astronauts shower in space?

Astronauts exercise twice a day in order to stay healthy in space, which means that showers play just as big a role in their space routine as they do in their earthly routine. However, water behaves differently in the ISS’s microgravity setting. Rather than flowing out of a faucet into a drain, water is stored in special containers with small tubes that keep it from floating freely around the cabin. Astronauts can pour handfuls of water out of these containers directly onto their hands. Because of surface tension, water acts as though it is sticky and stays directly on the skin. The astronaut can then mix the water that is on their skin with a specially formulated soap that can be lathered the same way it would on Earth but doesn’t require rinsing. Astronauts also have a no-rinse shampoo that they can use by squirting water into their hair, adding the shampoo, and lathering it into their scalp. However, instead of washing it off the astronauts simply take a towel and pat dry the extra shampoo and water. The used towels are then placed near ventilation ducts that suck up the moisture, recycling the dirty water and turning it back into potable water for the astronauts to drink or use on the station.

How do they brush their teeth?

Aboard the ISS, dental hygiene is pretty much the same as on Earth – with a few key differences. Astronauts use a toothbrush with their mouth closed to carefully brush their teeth without letting any water or toothpaste fly out into the cabin. Once they’re done brushing they can’t spit their foamy saliva into a sink, so instead they swallow the foam and drink water to get rid of the toothpaste taste.

Do astronauts clip their nails?

When clipping your nails on Earth, you have to keep track of all of the clippings to either throw away or vacuum up when you’re done. But in space, rogue nail clippings can fly everywhere and get lodged into parts of the cabin, fly in astronauts’ eyes, and even get inside the mouths and noses of other astronauts. To avoid this, astronauts have figured out a genius way to easily clip their nails without having to chase down every single clipping. The ISS has an internal air filtration system that keeps the air inside the station from going stagnant. The system has vents that suck up the air located around the cabin. Astronauts found that if they cut their nails next to these air ducts, the air sucking will collect all of the clippings in the filter for them as they cut.

Do astronauts shave in space?

What about using the bathroom in space?

We can’t talk about staying clean in space without addressing this – and we’re sure you’ve probably wondered about it once or twice. Astronauts don’t suddenly stop going to the bathroom because there’s no running water in space (science has yet to figure that one out) and they definitely don’t use diapers. They actually go with the help of specially designed toilets that utilize airflow to draw waste away from the body. Astronauts have to go through positional training to ensure that the waste goes directly into the narrow opening of the space toilet. A special camera is used to ensure their alignment is 100 percent perfect every time. Urine is captured in the ISS filtration system and turned back into potable water. So, if you’re looking for a glamorous experience, being an astronaut aboard the ISS probably isn’t the right path for you. Learn more about the hygiene habits of astronauts by planning a trip to Kennedy Space Center and speaking to real astronauts! Download a digital copy of the 2019 Florida’s Space Coast Vacation Planner today to start planning your Kennedy Space Center experience.